Many languages don’t have articles, so English language learners often struggle with using a or the. Over the years, I’ve found that presenting articles (also called “determiners”) in a chart like the one below helps students see which one to use and why. When students are getting frustrated, remind them that it could be worse—they could be learning a language like French that has male/female and singular/plural articles, too! 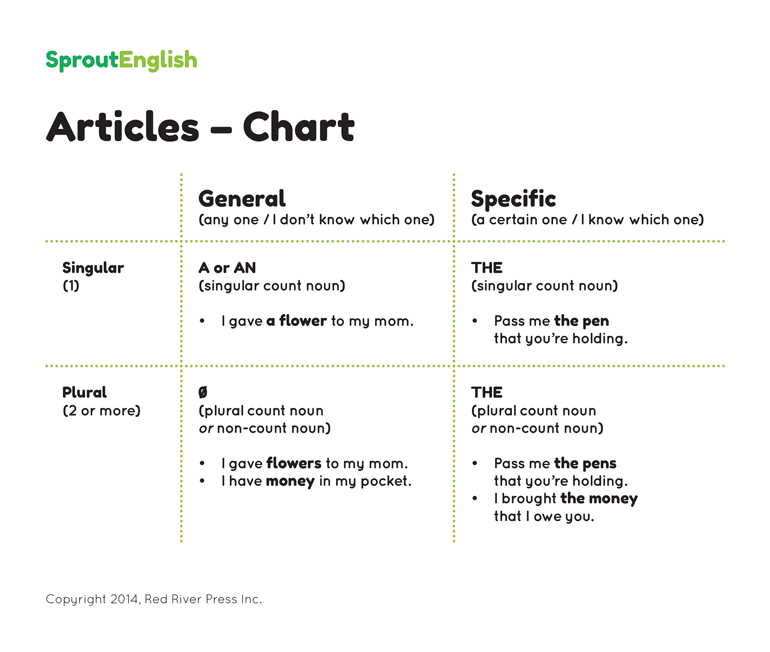 1. I usually explain the concepts of general and specific with a lot of examples. Here’s an example of how I’d show my students what general (also called “indefinite”) means:

Here’s an example of how I’d explain what specific (also called “definite”) means:

3. Remind students that we must use the when there is only one of something. Examples include the sun, the moon, the earth / the library, the bank, the laundromat (in a town) / the door, the whiteboard, the teacher’s desk (in your classroom).

4. Remind students that we use the when it’s the second mention of the noun. Even though we still can’t see it, we know which one the speaker is talking about because it has been introduced. For example: I saw a movie last night. The movie was so boring that I fell asleep.

5. Remind students that we use the when the noun has an adjective clause or phrase that modifies it. The extra information that describes the noun makes it clear to which noun we’re referring. For example: The dog that follows me home every day is really friendly.

See if your students can choose the correct article in the following printable practice exercises!

Purchase a subscription to access all our Young Learner resources. Only $7 a month.