The simple future is a bit more complicated than the other simple tenses in English. There is more than one way of making a future verb. You can use the modal will + base verb, the modal expression be going to + base verb, or the present progressive form of be + -ing verb. What’s the difference between these forms? How can you teach them all to your students? In this post you’ll find information on the three future forms, a handy comparison chart that you can print out, fun activities using the future (for warm-ups or fillers), and links to practice exercises. 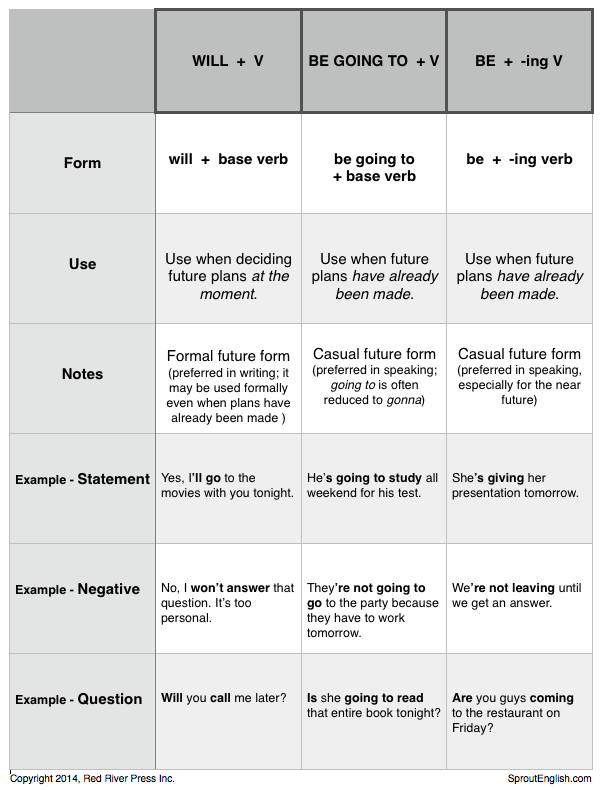 1. Form: The future modal will is used with the base form of the verb.

2. Use: This form is used when you are deciding future plans at the moment. For example, if someone invited you to go to a party next Friday, you could answer, “Sure, I’ll go.”

Will is also generally considered to be a more formal way of forming the future.

BE GOING TO + BASE VERB

1. Form: The modal expression be going to is used with the base form of the verb. The be verb is conjugated according to the subject (am, are, is).

Pronunciation Note: It’s important to tell students that going to is often reduced to gonna. Remind them that while the reduced form is very common in speaking, it’s not often used in writing (except in casual writing such as a text message to a friend). Most students think it’s fun to practice reduced forms, so encourage them to use gonna in speech.

Be going to + base verb is considered to be more casual than will + base verb.

1. Form: The present progressive (be and the -ing form of the verb) can be used to indicate a future time. The be verb is conjugated according to the subject (am, are, is).

2. Use: Occasionally, English speakers use the present progressive as a future form. It is used the same way as be going to—when plans are already made. For example, if you have plans to go camping next weekend and someone asks you what you are going to do, you could answer, “I’m going camping next weekend.”

The present progressive is a casual way of forming the future (slightly more casual than be going to + base verb, in my opinion). It is also commonly used for the near future (tonight, tomorrow, next weekend, etc.).

What happens when we use two future verbs in the same sentence?

Something important to remind students of is that unlike the other simple tenses, English does NOT use a future form twice in most sentences. The simple future form is used in the independent clause and the simple present is used in the dependent clause. Make sure students realize that the order of the clauses can change in a sentence with no difference in meaning, so the best way to know which clause is dependent (and requires a present verb) is to look for the adverb of time (when, while, etc.). Also, remind students that because the form in the dependent clause is the simple present, third person singular subjects take a verb ending in -s.

1. Goals: Goal-setting is a great activity to practice the future. Have students interview each other about their future goals and plans. Make sure they use be going to + base verb and/or the present progressive. Have them practice saying “gonna”. Check out 6 Ways to Set Goals with Students, 5 Tips for ESL Parents, and Setting Goals for ideas and inspiration!

2. Fortunes: Get students to practice using will + base verb by telling each other’s fortunes. They can write fortunes on pieces of paper, pass them around, and read out their fortunes to each other. Or you could find a simple palm-reading task online (such as Wiki’s guide) and have partners read each other’s life lines, head lines, and heart lines.

3. Travel Plans: Put students into small groups and have them plan an imaginary trip. They can decide where to go, how long they’ll stay, what they’ll bring, what they’ll do, etc. During their planning as they make decisions, have them use will + base verb. Later, when they report their trips to the class, they can use be going to + base verb or the present progressive to describe the plans they’ve already made.

Sprout English has many simple future resources for young learners! Start with our lesson of the week, Andy, a reading about a student who makes some goals for next year. Then try some of our other many lessons:

Purchase a subscription to access all our Young Learner resources. Only $7 a month.

One Response to “Teaching the Simple Future: 3 Forms”